April 06, 2020
I always was fascinated by computer tape drives. Ultimately by those huge open-reel systems you see spinning in about every movie scene from the 60s to the 80s that takes place in a computer centre. Having learnt about the mechanics of those monsters (vacuum columns, reel servos, etc.), they are even more amazing. I am almost absolutely sure that someday, I will have one of those things standing in my living room. For now, my late 70s Telefunken M15A professional audio recorder comes close (53kg without the matching stand), but it isn't a computer drive. Although, I planned to have it under computer control (MIDI) for some time... ✇

I recently bought a 2001 Hewlett-Packard C6364A external SCSI tape drive. Why? I can't really tell. Maybe because it was only ten bucks, and it's a computer tape drive, a very small one.
DDS type backup systems were common in the 90s and early 2000s. The medium is the same form factor as a DAT tape but uses a different formula and evidently thinner tape. Since the introduction in 1989, there were 7 variants of the format with a storage capacity of up to 320 GB eventually.
My drive is a third-generation DDS-3 type with capacities of up to 12 GB (or 24 GB compressed) on a 125 m tape. 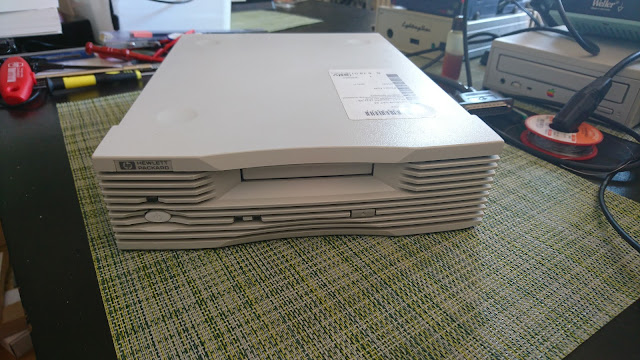 Visually it was in good shape and was recognized instantly on the SCSI chain by various computers. Internally, the drive is an HP C1537A mounted into an external housing. However, it would not load a tape. The cartridge was pulled inside and after some time and some noise, it was ejected again. I opened the case (which is very easy), removed the mechanism from the inner housing and had a closer look. 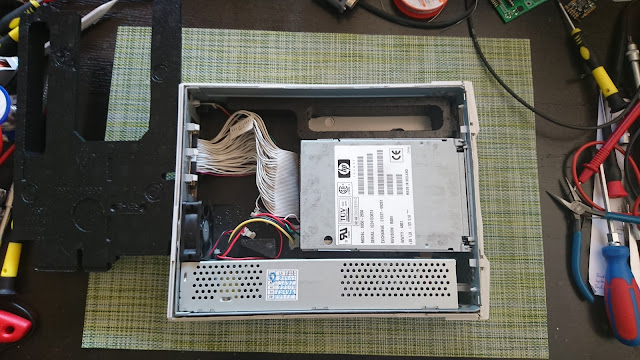 What the drive is supposed to do is to pull the cartridge inside, raise the drive spindles and tape guides, pull the tape out and around the head drum. Almost like the M-load mechanism on a VHS machine (remember these?). However, it only made it halfway to raising the spindles and got stuck. Thankfully the drive was able to detect this fault and reversed the process without damaging any of the gears. 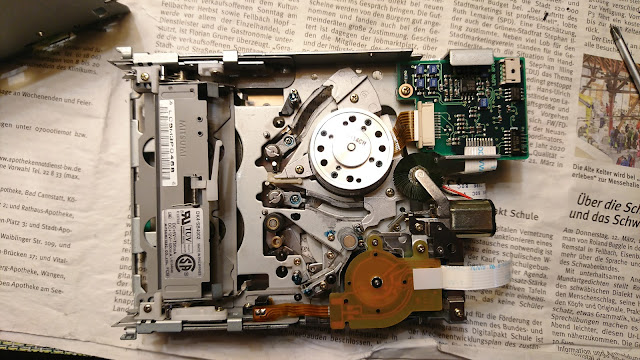 I removed the little cleaning wheel and the motor that drives the mechanism to get better access and be able to advance it by hand to see what was stuck. Referring to the following image, the silver tray on the lower left side moves the spindles and tape guides up and down. In the halfway position where it was stuck, three of the four bearings moved freely inside the groove. But the one in the centre of the image was stuck. Previously I noticed a slightly bent part on the far left, but this was not the issue. However, the grey metal frame seemed to be bent very slightly upwards. You can see a tiny deformation on the right edge of the right slot. I verified with a calliper that the slot was 0.2 mm narrower than the one on the left. Using the blade of a flat screwdriver, I widened the slot, enabling the tray to move freely. 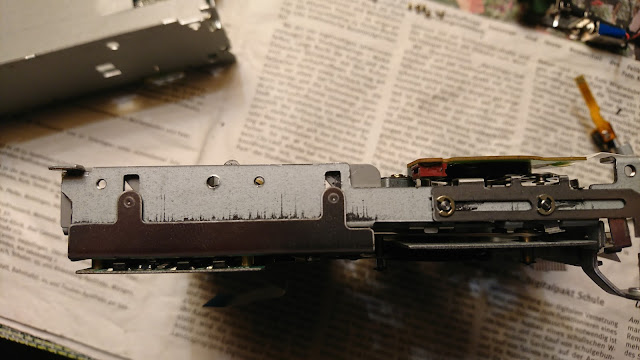 The mechanism now worked when turned by hand, so I reassembled the drive and powered it up. To my amazement, it loaded the tape successfully. But my joy would not last for long. I hooked the drive up to my PowerBook G4 with MacOS 9 for which I have a PCMCIA-SCSI adaptor and loaded a copy of Retrospect from Macintoshgarden.org. The drive was recognized by the software but when I wanted to start a backup, it rewound, looked for the beginning of the tape and complained about "bad media", but it was fun to see the little cleaning wheel trying to clean the heads. It is activated by a solenoid and pushes the wheel slightly against the head drum in order to remove any buildup.  I wanted to try a different portion of the tape, but Retrospect would not let me do anything else with it.
Suntar to the rescue! From the CuriousMarc YouTube channel (highly recommended!) I learned about this program. It allowed me to wind the tape to either end and make a low-level format. After only about two hours it was finished and Retrospect allowed me to make a backup! 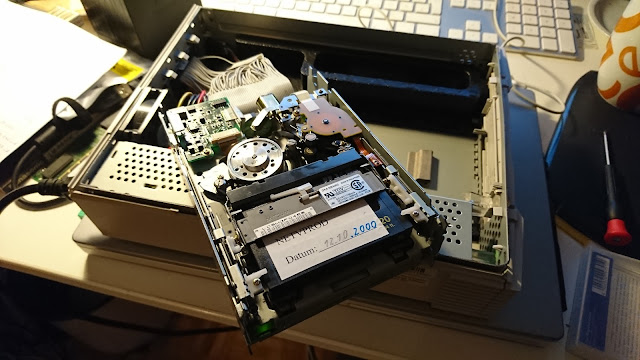 Am I going to use it for anything? Probably not. For my modern computers, the capacity is way too low and my vintage computers don't really need a backup. Was it fun and interesting? For sure! I'm always satisfied when I can repair a broken piece of hardware. 😊 I will see what else I can do with this thing. I'll report when I am the owner of an open-reel 9-track unit!
Mac