June 16, 2019
Last year, my Commodore 1084S monitor that I used with the IIgs failed with a high pitched whine. Research showed that this seems a pretty common failure where the flyback transformer and or the HOT (horizontal output transistor) kicks the bucket, probably due to bad capacitors in the power supply. Oh, and the power switch failed, too, so that it was permanently on. Another common failure.
I looked on eBay and learned that these monitors fetch prices of 60€ and up, excluding shipping. I paid about 15 Eur for the monitor when I bought it 16 years ago when nobody cared about all that retro stuff. I happen to know the exact date: it was my 18th birthday when I went to a local collector and bought, besides the monitor, a Commodore CBM 8032 computer, a CBM 8050 dual floppy and a CBM 8024 printer (this thing is a huge 15" 9-pin printer!) for 50€. Nowadays, the components fetch 200-300€ each! This purchase, aside from a C64 I was given previously, started my retro-computing career. I bought and sold a lot of old computers in the years after, but I will tell the stories in another post sometime.

There are plenty of repair blogs for this monitor online. One very extensive is this one: http://www.jammarcade.net/monitor-repair-logs/
I found a replacement transformer online for 35€, so I thought I could give it a try and ordered it from Poland, along with a new HOT for 2.50€. After replacing the components and swapping the capacitors in the power supply along with them, I switched on the monitor (hiding behind the sofa) and it worked! That thing is gonna last for another thirty years!

Or so I thought! A couple of weeks ago, I wanted to tweak the picture a little as I had noticed that the colours did not line up as good as they could. After about two hours of meddling with the deflection yokes, I managed to get a better picture. Then right after I reassembling it again I tested it with my newly acquired Sega Mega Drive there was a 'pop' and a bit of funny smell and the monitor went off 🙈. Probably it could not stand the shame of being connected to an Apple computer and a Sega console for so long.

Fast forward a couple of weeks and I found a very good deal on a Sony PVM-1454QM monitor (tube dates to June 1996) that was only a 30-minute drive away and I have to say that it does not get much better than this. It's built like a tank and is a professional broadcast monitor that has a  14" HR-Trinitron CRT that produces razor-sharp images. I am sure that when comparing it to the 1084S the latter one would not stand a chance (if I could). What I am also sure of is that the original price tag was a completely different one than the Commodore's.
The CRT is capable of displaying 600 lines in PAL, NTSC and SECAM and it comes with two composite inputs, one S-Video input, an option for digital SDI video (which mine does not have) and, most importantly, a combined RGB/component input. All inputs may be passed through to other equipment, as well. It has all the professional features of external sync, adjustable colour balance, blue only view, underscan view, h/v delay view, 16:9 switching and a remote connector for controlling all those functions. The only two things it does not have, compared to the 1084S, is digital RGB, which I don't need and stereo sound, which is a shame, as I was planning to get a stereo card for the IIgs.

Speaking of the IIgs it was almost too easy to connect it: the monitor supports sync-on-green, so just wire up the red, green and blue signals from the monitor port and you're ready to go! Another benefit is that it has a flat top so that the IIgs fits quite nicely on it. 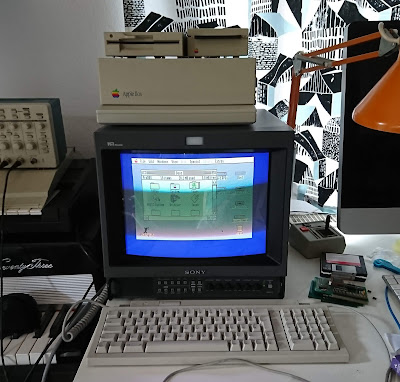